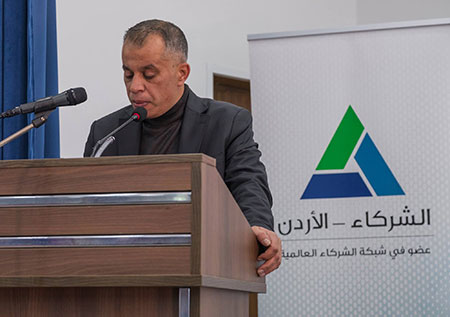 Under the patronage of Acting Mayor of Mafraq, Mr. Sami Basbous and within the project (participatory budget - Peoples voice in numbers). Partners Jordan Center and the greater Mafraq Municipality conducted a community event entitled "Citizen's Day" This event comes as a continuation of a number of events and activities carried out by the project.

During this event the results of the field survey carried out by the center within the geographical areas of Al Mafraq municipality were presented in order to identify the most important developmental needs of the population, this event took a place in the presence of the Head of Spanish Agency for International Development (ACIED) in Jordan and a great number of citizens representing most of the segments of society and civil society organizations and Syrians in Mafraq.

At the end of this day, three committees were formed, each committee for one developmental priority. These committees will work in cooperation with the municipality , to integrate these priorities and the resulting projects within the municipal budget of 2019.

The participatory budget project is part of Qudra program which the regional action financed by EU Regional trust fund in Response to the Syrian crisis. the " Madad" fund and the german federal ministry for economic cooperation and development ( BMZ) seeking to strengthen resilience for Syrian refugees, IDPs and host communities in response to the Syrian and Iraqi crisis.